Jet engines, which are also called gas turbines, work by sucking air into the front of the engine using a fan. From there, the engine compresses the air, mixes fuel with it, ignites the fuel/air mixture, and shoots it out the back of the engine, creating thrust.

A turbofan engine, sometimes referred to as a fanjet or bypass engine, is a jet engine variant which produces thrust using a combination of jet core efflux and bypass air which has been accelerated by a ducted fan that is driven by the jet core. 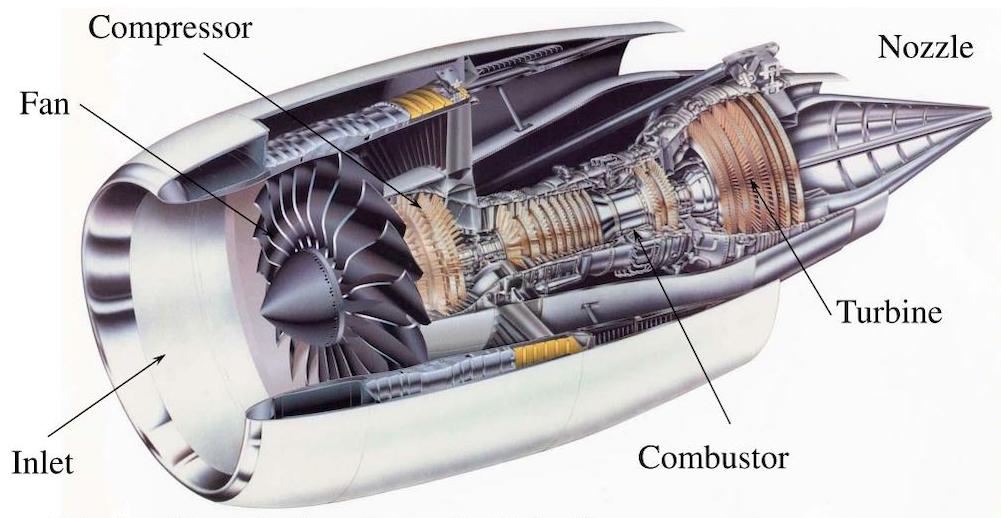 The first part of the turbofan is the fan. It’s also the part that you can see when you’re looking at the front of a jet.

The fan, which almost always is made of titanium blades, sucks in tremendous quantities of air into the engine.

The air moves through two parts of the engine. Some of the air is directed into the engine’s core, where the combustion will occur. The rest of the air, called “bypass air”, is moved around the outside of the engine core through a duct. This bypass air creates additional thrust, cools the engine, and makes the engine quieter by blanketing the exhaust air that’s exiting the engine. In today’s modern turbofans, bypass air produces the majority of an engine’s thrust.

The compressor is located in the first part of the engine core. And it, as you probably have guessed, compresses the air.

The compressor, which is called an “axial flow compressor”, uses a series of airfoil-shaped spinning blades to speed up and compress the air. It’s called axial flow, because the air passes through the engine in a direction parallel to the shaft of the engine (as opposed to centrifugal flow).

As the air moves through the compressor, each set of blades is slightly smaller, adding more energy and compression to the air.

In between each set of compressor blades are non-moving airfoil-shaped blades called “stators”. These stators (which are also called vanes), increase the pressure of the air by converting the rotational energy into static pressure. The stators also prepare the air for entering the next set of rotating blades. In other words, they “straighten” the flow of air.

When combined, a pair of rotating and stationary blades is called a stage.

The case contains all the parts of the combustor, and inside it, the diffuser is the first part that does work.

The diffuser slows down the air from the compressor, making it easier to ignite. The dome and swirler add turbulence to the air so it can more easily mix with fuel. And the fuel injector, as you probably guessed, sprays fuel into the air, creating a fuel/air mixture that can be ignited.

From there, the liner is where the actual combustion happens. The liner has several inlets, allowing air to enter at multiple points in the combustion zone.

The last main part is the igniter, which is very similar to the spark plugs in your car or piston-engine airplane. Once the igniter lights the fire, it is self-sustaining, and the igniter is turned off (although it’s often used as a back-up in bad weather and icing conditions).

It sounds simple, but it’s actually a very complex process. That’s because the combustor needs to maintain a stable combustion of fuel/air mixture, while the air is moving through the combustor at an extremely fast rate.

The last step of the process happens in the nozzle. The nozzle is essentially the exhaust duct of the engine, and it’s where the high-speed air shoots out the back.

This is also the part where Sir Isaac Newton’s third law comes into play: for every action, there is an equal and opposite reaction. Put simply, by forcing air out the back of the engine at high-speed, the airplane is pushed forward.

In some engines, there’s a mixer in the exhaust nozzle as well. This simply mixes some of the bypass air flowing around the engine with the hot, combusted air, making the engine quieter.

To start an engine on the Boeing 737, a number of tasks in a checklist has to be followed.

The ones directly concerning engine operation are:

Fuel Pumps of the aircraft have to be turned on, this transfers low pressure fuel from the fuel tanks to the engine’s bar valve. In order to crank the engine, pneumatic power is required. Three sources of pneumatic power can be used by connecting an external jet starter unit. From the other engine if it’s running, or from the APU which is the standard practice.
Ignition switch position has to be changed. For redundancy each engine has two ignition system, left and right, standard procedure requires to change the switch position before each start.

Now that the engine is configured for start. Turn the engine start switch to ground start position, a solenoid controlled by display electronics unit latches and holds the switch. The start switch now sends an electrical signal to the start valve on the engine fan case to open, the pneumatic power reaches the starter.
The starter which is an air-driven motor, consisting of turbine reduction gears, and clutch turns the output shaft of the accessory gearbox on the engine. The output shaft of the gearbox turns the N2 rotor of the engine on which are mounted high pressure compressors and high pressure turbine.
N2 rotation induces air suction into the engine. As a result, the N1 rotor of the engine on which the fan low pressure compressors and low pressure turbines are mounted begins to rotate marginally.
Speed sensors send the rotation speed of the N2 and N1 rotors to DEU, which displays them in the cockpit, the N2 reaches 25% of its maximum rpm, the engine has now reached the maximum motoring stage.

Now move the start lever from cut off to idle position. The start lever causes engine fuel spar valve to open, and fuel reaches the engine shutoff valve. The start lever also sends an electrical signal to the electronic engine control.
The EEC commands the engine shutoff valve to open transferring fuel to the engine fuel pump mounted on the accessory gearbox. The fuel pump increases the fuel pressure and transfers it to the fuel metering valve.
EEC now controls the rate of fuel flow by controlling the fuel metering valve, which transfers the fuel into the combustion chamber through the fuel nozzles. At the same time, EEC commands the ignition exciter box to ignite the fuel air mixture in the combustion chamber with the help of igniter plug.
The combustion increases high pressure and low pressure turbines rotation , this shoots up the N1 and N2 rotors rpm. Thermocouple sensors send the exhaust gas temperature data to the EEC.

EEC monitors engine parameters and if it notices any anomaly immediately cuts off the fuel supply and ignition. At 56% N2, the engine reaches a self-sustainable level. The DEU removes the ground from start switch solenoid and the switch goes to off position, this removes the power to the start valve, which closes to stop the pneumatic supply to starter.
The reduction in pressure reduces starter speed, which disengages the clutch isolating the starter from the engine gearbox rotation. As the temperature inside combustion chamber is enough for continuous fuel air mixture ignition, EEC deactivates the ignition system. Now the engine has reached the idle stage.