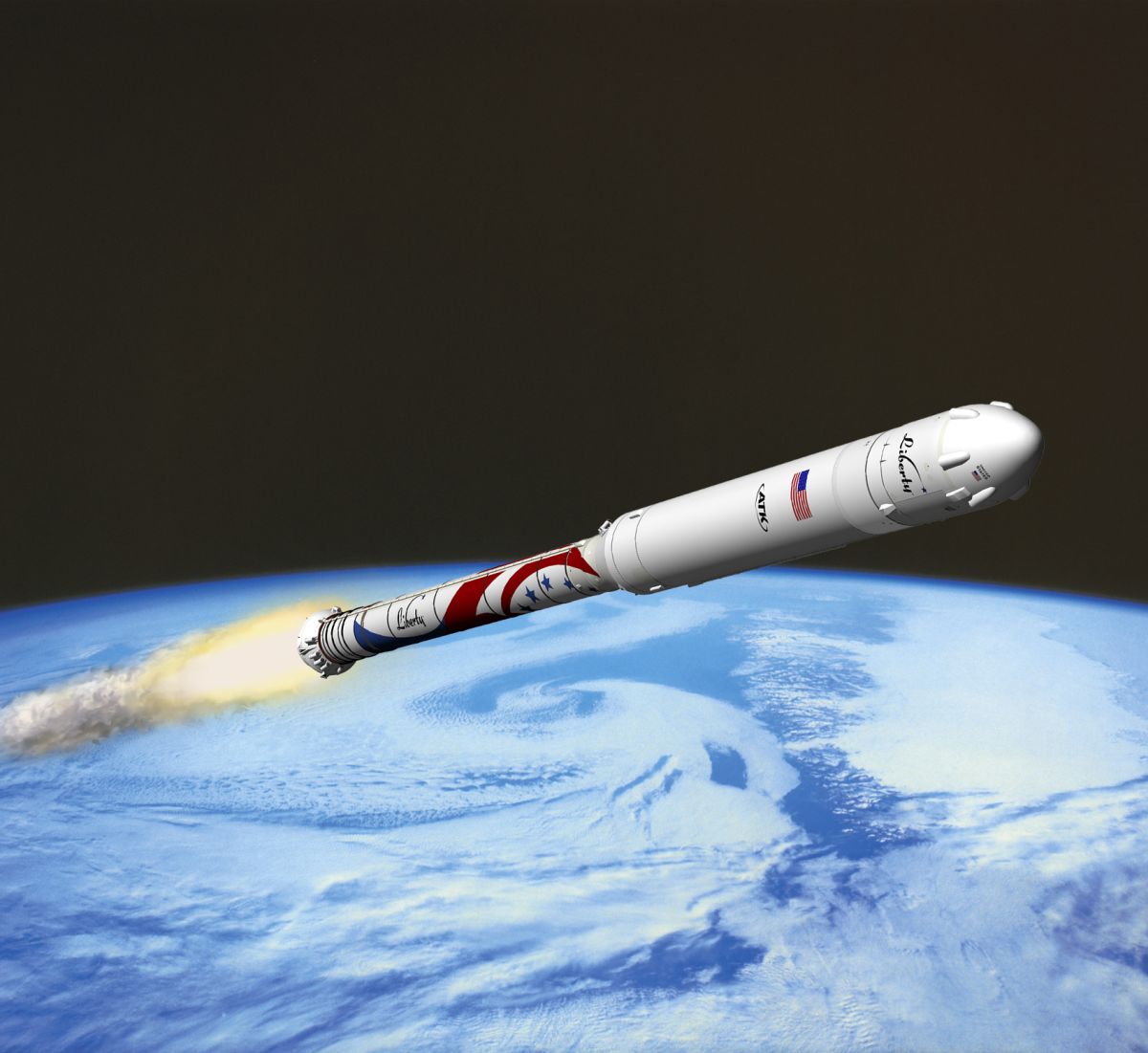 Rocket equation is a mathematical equation that describes the motion of vehicles that follow the basic principle of a rocket: a device that can apply acceleration to itself using thrust by expelling part of its mass with high velocity can thereby move due to the conservation of momentum.

$\Delta v$ is delta-v – the maximum change of velocity of the vehicle (with no external forces acting).

$I_{\mathrm{sp}}$ is the specific impulse in dimension of time.

$\ln$ is is the natural logarithm function.

So the necessary wet mass grows exponentially with the desired delta-v, as illustrated in the chart.

Delta-v (literally “change in velocity”), symbolised as ${\Delta v}$ and pronounced delta-vee, as used in spacecraft flight dynamics, is a measure of the impulse that is needed to perform a maneuver such as launching from, or landing on a planet or moon, or an in-space orbital maneuver. It is a scalar that has the units of speed. As used in this context, it is not the same as the physical change in velocity of the vehicle.

Delta-v is produced by reaction engines, such as rocket engines and is proportional to the thrust per unit mass, and burn time, and is used to determine the mass of propellant required for the given manoeuvre through the rocket equation.

For interplanetary missions delta-v is often plotted on a porkchop plot which displays the required mission delta-v as a function of launch date.

The effective exhaust velocity is often specified as a specific impulse and they are related to each other by:

$I_{\mathrm{sp}}$ is the specific impulse in seconds,

With three similar, subsequently smaller stages with the same $v_{\mathrm{e}}$ for each stage, we have

If the motor of a new stage is ignited before the previous stage has been discarded and the simultaneously working motors have a different specific impulse (as is often the case with solid rocket boosters and a liquid-fuel stage), the situation is more complicated.

In the following derivation, “the rocket” is taken to mean “the rocket and all of its unexpended propellant”.

Newton’s second law of motion relates external forces ($F_{i}$) to the change in linear momentum of the whole system (including rocket and exhaust) as follows:

and where, with respect to the observer:

Assuming $v_{\mathrm{e}}$ is constant, this may be integrated as follows:

where $m_{0}$ is the initial total mass including propellant, $m_{f}$ the final mass, and $v_{\mathrm{e}}$ the velocity of the rocket exhaust with respect to the rocket (the specific impulse, or, if measured in time, that multiplied by gravity-on-Earth acceleration).

The equation can also be derived from the basic integral of acceleration in the form of force (thrust) over mass. By representing the delta-v equation as the following:

and realising that the integral of a resultant force over time is total impulse, assuming thrust is the only force involved,

The integral is found to be:

Realising that impulse over the change in mass is equivalent to force over propellant mass flow rate (p), which is itself equivalent to exhaust velocity,

the integral can be equated to

Imagine a rocket at rest in space with no forces exerted on it (Newton’s First Law of Motion). From the moment its engine is started (clock set to 0) the rocket expels gas mass at a constant mass flow rate $R$ ($kg/s$) and at exhaust velocity relative to the rocket $v_{e}$ ($m/s$). This creates a constant force $F$ propelling the rocket that is equal to $R \times v_{e}$. The rocket is subject to a constant force, but its total mass is decreasing steadily because it is expelling gas. According to Newton’s Second Law of Motion, its acceleration at any time $t$ is its propelling force $F$ divided by its current mass $m$:

The rocket equation can also be derived as the limiting case of the speed change for a rocket that expels its fuel in the form of $N$ pellets consecutively, as $N \rightarrow \infty$, with an effective exhaust speed $v_{\mathrm{eff}}$ such that the mechanical energy gained per unit fuel mass is given by $\frac{1}{2} v_{\mathrm{eff}}^{2}$ .

In the rocket’s center-of-mass frame, if a pellet of mass $m_{p}$ is ejected at speed $u$ and the remaining mass of the rocket is $m$ , the amount of energy converted to increase the rocket’s and pellet’s kinetic energy is

Using momentum conservation in the rocket’s frame just prior to ejection, $u=\Delta v \frac{m}{m_{p}}$ , from which we find

If special relativity is taken into account, the following equation can be derived for a relativistic rocket, with $\Delta v$ again standing for the rocket’s final velocity (after expelling all its reaction mass and being reduced to a rest mass of $m_{1}$) in the inertial frame of reference where the rocket started at rest (with the rest mass including fuel being $m_{0}$) , and $c$ standing for the speed of light in a vacuum:

Then, using the identity