Venus has a surface gravity slightly lower than on Earth and has a weak induced magnetosphere. The atmosphere of Venus consists mainly of carbon dioxide, and, at the planet’s surface, is the densest and hottest of the atmospheres of the four terrestrial planets.

With an atmospheric pressure at the planet’s surface of about 92 times the sea level pressure of Earth and a mean temperature of 737 K (464 °C; 867 °F), the carbon dioxide gas at Venus’s surface is in the supercritical phase of matter. Venus is shrouded by an opaque layer of highly reflective clouds of sulfuric acid, making it the planet with the highest albedo in the Solar System. It may have had water oceans in the past, but after these evaporated the temperature rose under a runaway greenhouse effect. The possibility of life on Venus has long been a topic of speculation but convincing evidence has yet to be found. 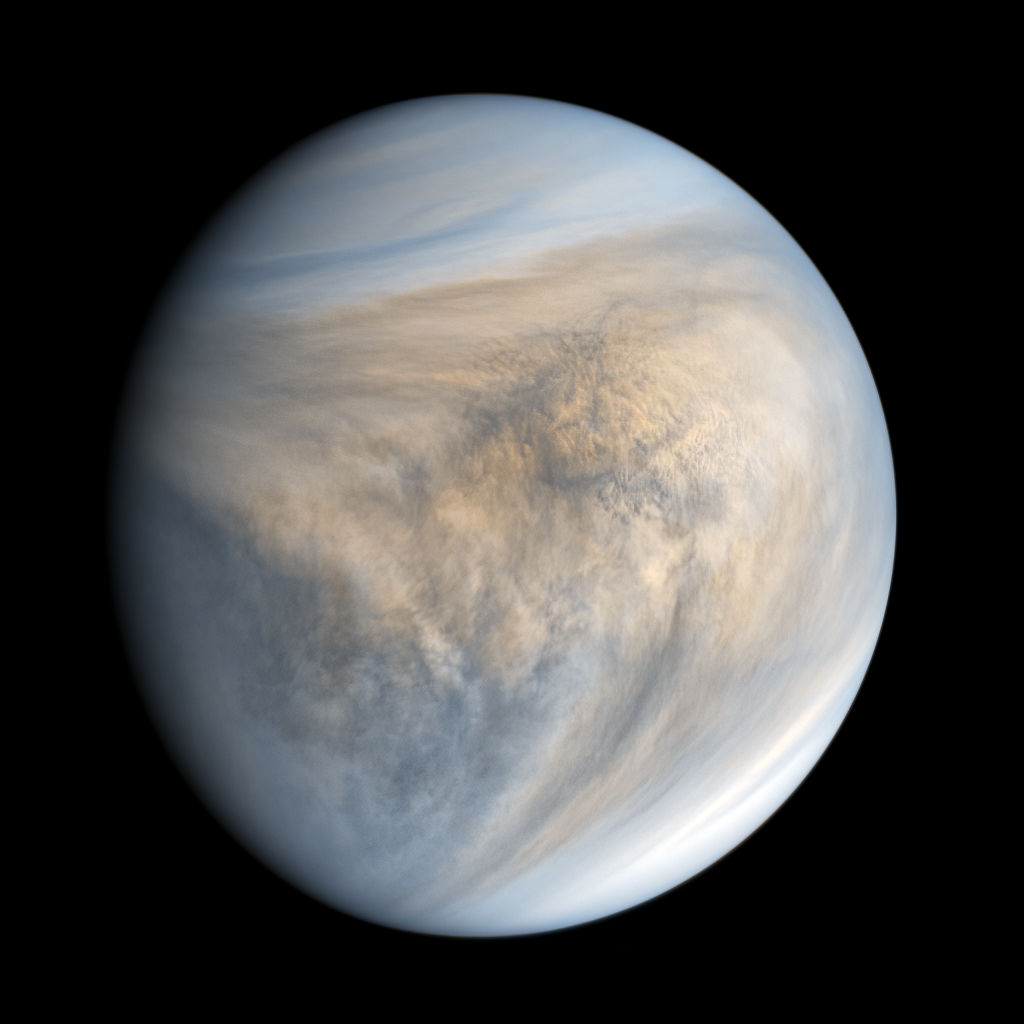 The surface of Venus is effectively isothermal; it retains a constant temperature not only between the two hemispheres but between the equator and the poles. Venus’s minute axial tilt—less than 3°, compared to 23° on Earth—also minimises seasonal temperature variation. Altitude is one of the few factors that affect Venusian temperature. The highest point on Venus, Maxwell Montes, is therefore the coolest point on Venus, with a temperature of about 655 K (380 °C; 715 °F) and an atmospheric pressure of about 4.5 MPa (45 bar).

Much of the Venusian surface appears to have been shaped by volcanic activity. Venus has several times as many volcanoes as Earth, and it has 167 large volcanoes that are over 100 km (60 mi) across. The only volcanic complex of this size on Earth is the Big Island of Hawaii.  This is not because Venus is more volcanically active than Earth, but because its crust is older and is not subject to the same erosion process. Earth’s oceanic crust is continually recycled by subduction at the boundaries of tectonic plates, and has an average age of about a hundred million years, whereas the Venusian surface is estimated to be 300–600 million years old.