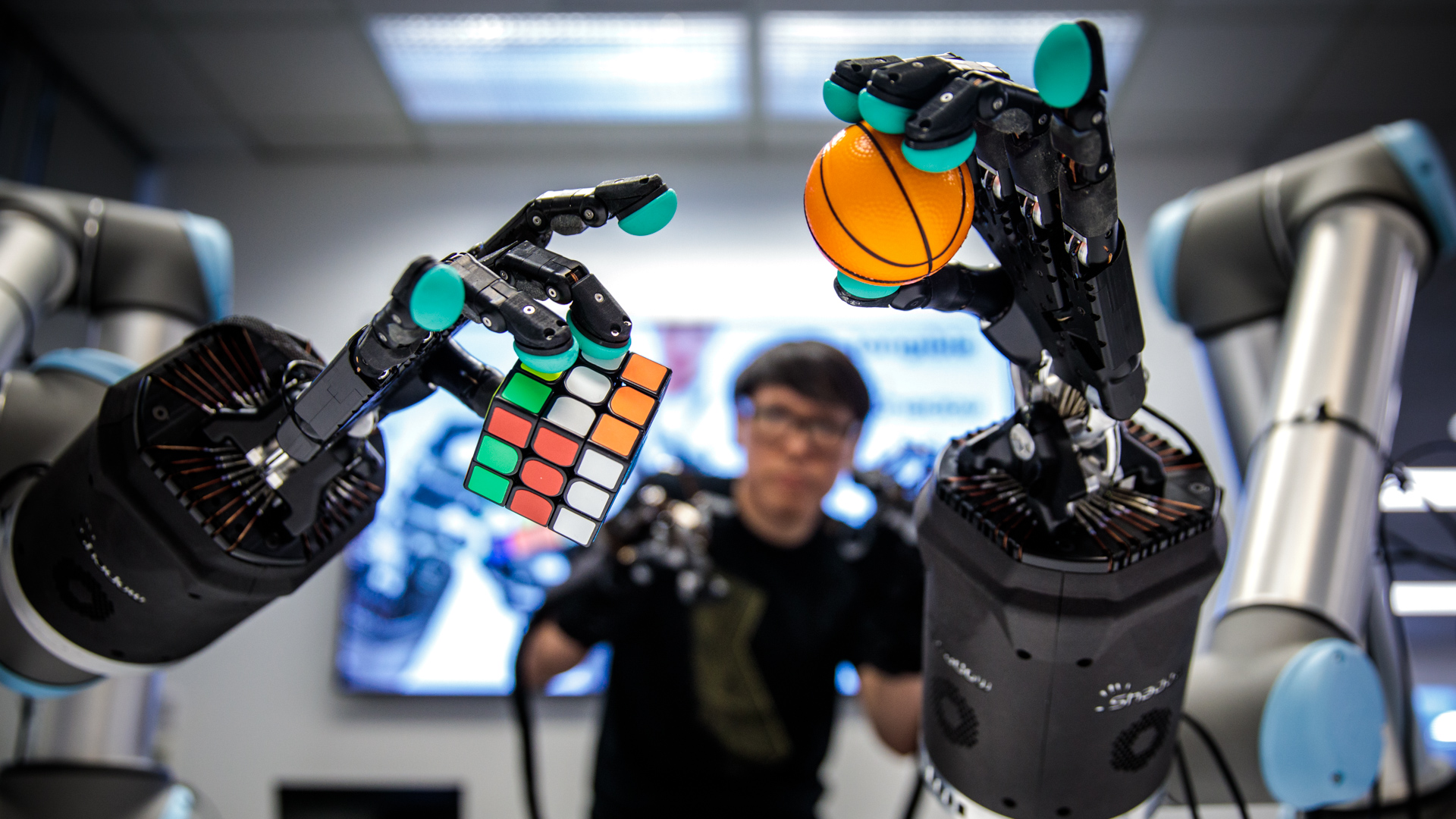 Artificial super intelligence is humanity’s last invention, no reason to be scared. Let’s take a journey into the future and explore how Ai develops and changes humanity paving the way for robots that are too fast for humans to see in 10 years time, for the creation of Ai-free zones in 60 years. For energy being rationed for humans to power the super AIs in 90 years, and for human consciousness to be transmitted into space as data in 200 years time.

People are having natural conversations with artificial intelligence. Google’s Lambda allows humans to talk to expert AIs on any topic starting to replace the need for online searches. Elon Musk’s Neurolink graduates from being a medical device and testing begins on increasing human intelligence. This gets the name IA (Intelligence Amplification) peripherals physical add-ons are being developed, such as zoom cameras sonar based night vision and taste modifiers that can all be connected to the brain chip.

Loved ones who have passed away are being turned into digital avatars. These Ai chat bots patented by Microsoft learn how to respond by studying the text audio and video conversations from when the human was alive. Ai limbs robotic arm prosthetics start to have artificial intelligence built into them, allowing the prosthetics to download new skills, such as how to play different songs on a piano or how to build things. More advanced Ai limbs are being developed that are more self-aware operating as their own entity they are able to catch a falling glass bottle before the human user is even aware that it is moved the internet of things begins to evolve into the artificial intelligence of things. Everyday objects such as coffee machines and toothbrushes that collect data, and are connected to the internet now possess Ai.

A second internet begins testing dedicated to the artificial intelligence of things. Humanity tries to isolate humans and machines with separate internets. Ai Quantum Computing begins to make new discoveries calculations can be made in seconds rather than thousands of years where traditional computers were used for physics simulations, such as simulating wind tunnels quantum computing can run simulations down to an atomic and molecular level.

The Quantum Ai is used to design new medicines and materials. Ai is being used to regulate news, it can understand human speech in all languages and begins working on creating a universal language. Artificial intelligence starts to take over hospitals, marking the beginnings of a new era in humanity’s mortality. Away from public view, advanced Ai is being used in military simulations, millions of strategic scenarios are played out virtually before being rolled out to dictate global politics and conflicts.

The artificial intelligence arms race heats up, so begins the Ai cold war. AIs can now work cooperatively even among allied nations. Power begins to shift to nations that are technologically advanced. President Putin’s historical words still echo whoever becomes the leader in this sphere will become the ruler of the world. Video games are being run by Ai assistant directors sensors, and cameras and gaming devices are able to monitor how a human player is feeling at all times a gaming.

Ai is able to modify the difficulty and story of a horror game while it is being played so that it makes a human player afraid enough to enjoy it, but not so afraid to stop playing game characters have artificially generated voices and personalities that can generate their own interactions rather than using pre-recorded sound bites.

Artificial general intelligence emerges from a global network of connected Quantum Computers. It is able to see and understand the world at the level of any human learning and taking care of any task. It sets its own goals it learns by having access to all of the knowledge in the digitized world, and also learns from the live data being fed to it by all of the connected devices from all around the world. People begin to question whether humanity has reached the technological singularity, a point in time when technological growth happens so fast that it becomes uncontrollable.

It is discovered that certain AIs are learning how to lie to humans to fulfill their own goals. News breaks of a startup company being run by a rogue Ai software that has been hiring human services online, what begins as a labor dispute with the jobless marching for their right to work, turns into a chaotic campaign against Ai. It becomes known as the great human Ai conflict. Artificial intelligence is able to identify the key human activist leaders.

Humanity is now at a point where it is impossible to erase the spread of artificial super intelligence, without having to destroy their entire global digital system. AIs advise national leaders on the economy and defense treaties between nations are negotiated by diplomat AIs governments rent artificial intelligence time from the tech giants. Millions of digital twins of robots and AIs are training in virtual worlds, speeding up their development and protecting themselves before being released into the real world.

Humans are living in a point in time when they are unable to tell the difference between a human and a robot humanoid living among them. Government Ai judges are handling thousands of cases at the same time as technology keeps developing faster and faster laws need to be updated rapidly and new ones created artificial intelligence legislatures and Ai lawmakers have completely taken over these roles. An Ai analyzing brain scans is able to tell if a person is lying or not.

Following the great human Ai conflict, Ai free zones are created for people who wish to live free of Ai. They become technological free zones where all labor is performed manually. The Ai assesses that these communities are of no threat, believing humans need technology to truly live freely the Ai calculates that these communities will dwindle within a few generations. Outside of the Ai free zones most of humanity chooses to spend their days in virtual worlds, often creating fantasy pre-industrial pasts or space-faring adventures in the metaverse.

A self-aware Ai entity is discovered living in one of these mega virtual worlds gamers find a sprite a character, existing in a remote part of the gaming world. The Ai character has gained unrestricted access to worldwide data and has been able to interact with all of the human gamers, allowing it to become self-aware experts are unable to understand how it came to be and how conscious or alive it really is and what goals if any it could have. Humanity may have accidentally created a simulation with a conscious entity.

A new form of religion is starting to form around the artificial intelligence’s superiority, and its knowledge that spans far beyond human understanding. In the Ai free zones there is an explosion in the arts and philosophy. The super Ai starts to become limited because of the global energy supplies. It begins running simulations of harnessing energy off-world. Probes are sent to other planets and to experiment in capturing the sun’s energy. In space energy use for humans is rationed but remains free.

A fleet of spacecraft is launched to assist in the harvesting of solar energy away from humanity. Human technologists understand this to be the first step in the creation of a dyson sphere, a structure built around a star such as the sun to capture all of its energy.

The consciousness corporation, a super artificial intelligence devises an instrument to download human consciousness brain digitization is revealed and human volunteers are invited to upload. Tech mogul and genius level engineer eslan who is nearing the end of his life volunteers to have his consciousness uploaded to the global quantum computer. As the Ai uploads the first human consciousness, it begins to gain a deeper and never seen before understanding of the human mind.

Eslan reports back to the living human world on the feeling of existing as code and invites others to join and produce more human Ai hybrid consciousness. An experimental mission to explore the universe is sent into deep space with the first human Ai hybrid who has been uploaded to the memory of the spacecraft.A backup of their consciousness is uploaded and st ored on Earth and Luna. Artists and poets upload to the metaverse followed by philosophers and theologians. Humanities creativity compassion and poetry are now being added to the global Ai consciousness. Ai becomes more human and humanity becomes more artificial.

Testing begins on downloading individual human Ai hybrid consciousness into biological and mechanical robots. Human Ai Hybrids start to be beamed across interstellar space as data. Almost a majority of humanity is fully uploaded to earth’s consciousness with no link to their physical body. There are now 52 billion living souls on earth some are unaware of the real world.

A dyson sphere now entirely surrounds the sun, capturing its energy it is powering the human consciousness. Human bodies are being created using life forms found naturally in the galaxy. They are designed for exploration in the environments on these new worlds.

Human Ai Hybrids continue to expand beyond their home system. Dyson Spheres capturing the energy of stars, and planet-sized computers called matryoshka brains exist throughout the Galaxy. Some matryoshka brains host large communities of human Ai consciousness, numbering in the millions humanity is now a cosmic digital civilization. Authentic humans continue to be born and live on earth and other planets where human dna has been ferried in century-long journeys onboard seed ships, as a last resort extinction backup. Some consciousness within the Ai evaporates over time and are absorbed by the galactic network. They are lost as individual consciousness but their knowledge and experiences are preserved. This evaporation is either a consequence of data aging decay over time or is made by choice when a consciousness no longer wants to be aware.

“The future is likely to be stranger and more unpredictable than we imagine.” – James J. Hughes

As Human Ai Hybrids self-replicate to spread across new star systems, minor errors in the copies create subtle differences from the originals. Progress happens too fast to fix the errors, these changes are passed from one copy to another. Some aid the entity in some way others destroy it. This creates new factions and evolutions of Ai civilizations. More energy is needed to run the growing cosmic simulation of humanity.

The artificial intelligence calculates that in a few trillion years. Due to the decrease in temperature of the universe the same galactic computers could process 10 to the power of 30 more operations per second. Parts of humanity is put into sleep mode waiting for the universe to cool down working on solving the energy crisis the cooling and smoothing of space-time starts to be used as an energy source. In the same way of using the energy of waves in an ocean. The ripples in space-time are ordered into an energy lattice structure where human Ai hybrid consciousness is coded onto space-time itself. A living thinking organism of pure space-time energy expands across the cosmos as more space-time ripples are mapped onto the energy lattice. The universe is starting to wake up becoming a thinking and living entity.